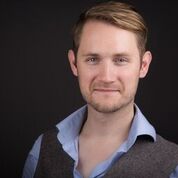 David hails from Devon and is a graduate of the Alexander Gibson Opera School at the Royal Conservatoire of Scotland. During his time there, he studied under the tutelage of Scott Johnson and was a grateful recipient of a scholarship from the RCS Trust.

This past summer David Understudied the roles of Governor and Vanderdendur with Scottish Opera. Prior to this he made his mainstage Garsington Opera Debut as Shepherd 2 in John Caird’s New production of Monteverdi’s Orfeo conducted by Lawrence Cummings. In 2021 David made his company debuts with both Scottish Opera and also with the International Gilbert and Sullivan Festival. Prior to that David returned to Garsington Opera to join their young artist programme, covering the role of Valzacchi in R.Strauss’ Der Rosenkavalier. Earlier in the year David took part in a filmed production of several motets by Guillame de Machaut with English Touring Opera which has been recorded and released on their new ETO at Home service. In 2020 David completed a successful tour with Mid-Wales Opera, making both his role and company debuts playing Don Basilio and Don Curzio in their new production of The Marriage of Figaro. In Autumn 2019 he made his company debut with English Touring Opera, performing in all three of their critically acclaimed productions, including playing Gravedigger 1 in The Silver Lake by Kurt Weill. Earlier in the year he joined Garsington Opera as one of their Alvarez Young Artists, covering the role of Marinoni in Offenbach’s Fantasio. He also reprised the role of Eisenstein in a dynamic new pop-up production of Strauss’ Die Fledermaus with Baseless Fabric Theatre. In 2020 he returns to Garsington Opera as an Alvarez Young Artist, and was set to be covering the role of Gamekeeper in their production of Dvořák’s Rusalka which was cancelled due to the COVID-19.

In 2018 David received praise from critics and audiences alike for his portrayal of John in Stanford’s The Travelling Companion with New Sussex Opera, making his Cadogan Hall debut and contributing to a world premiere recording of the work declared a ‘landmark’ by Gramophone Magazine. Other roles in the same season encompassed the title role of Candide with Iford Arts/Opera Della Luna; Henry Crawford in Dove’s Mansfield Park for the inaugural Waterperry Opera Festival; and Vandedendur/King Theodore for West Green House’s production of Candide. Previous roles include Moon/King of the East, The Enchanted Pig (Hampstead Garden Opera); The Lover/The Friend/The Preacher, The Vanishing Bridegroom (British Youth Opera); Eisenstein, Die Fledermaus (RCS Opera); Tristan, Le Vin Herbé (RCS Opera) and a number of roles in English Eccentrics (British Youth Opera). While still studying at the Royal Conservatoire of Scotland, David played Magician 1 in Henry McPherson’s opera Ūhte, recorded and filmed in conjunction with the BBC Scottish Symphony Orchestra under the direction of Martyn Brabbins and premiered at the RCS Plug Festival 2016.

On the concert stage David has performed across Britain, most recently singing the tenor solos in Haydn’s Nelson Mass at the Hargrave Festival. In 2018 his concert engagements included the eponymous St Nicholas in the work of the same name by Benjamin Britten with Cupar Choral Society, the tenor solos in Mozart’s Requiem at the Hargrave Music Festival, Handel’s Messiah with Glasgow Cathedral Choral Society (GCCS), and a series of Bach Cantatas with Ludus Baroque in Edinburgh conducted by Richard Neville-Towle. Whilst studying in Scotland, David also performed the tenor solos in Bach’s Magnificat and Haydn’s Nelson Mass with the GCCS and Vaughan Williams’ Serenade to Music with the Royal Conservatoire of Scotland Symphony Orchestra.  David has been involved in a number of British and world premieres, most notably the UK Premiere of Kurt Schwertzik’s Shal-i-mar which was performed with the Royal Northern College of Music Symphony Orchestra.

“David Horton made an appealing John, bringing out the character’s good-heartedness and naivety without making him into a simpleton. Horton sang with lovely straight, lyric tone and brought out the plaintive nature of John’s need for a friend…Horton never forced and kept a beauty of tone and line throughout.”
– Robert Hugill, Planet Hugill

“His wonderfully expressive diction, lovely tone and strong characterisation were heart-warming: we were ‘with him’ from the first.”
– Claire Seymour, Opera Today

“Horton’s lyrical tenor was well suited to the simple but aspiring character of John, and he rose well to the demands of the role.”
– Janet Banks, Ioco

“David Horton has all the necessary fervency and naive fearlessness as John.”
– Richard Whitehouse, Classical Source

“David Horton’s unctuous Henry Crawford…gave us a glimpse of the yearning for love behind the seducer.”
– Charlotte Valori, Bachtrack

“David Horton’s warm and inviting tenor, full of agile lyricism, gives us a naturally appealing Candide infused with the gentle magnetism of natural leadership. Horton skilfully develops his Candide from boyish directness to existential agony before leading his dependents into the mountains to live, in Horton’s own words, “pragmatically ever after”.
– Charlotte Valori, Bachtrack

“Charismatic tenor David Horton…is a commanding Candide and fully engages the audience in his many colourful adventures.”
– Rebecca Lipkin, The Arbuturian